The limited hydrocarbon reverses and the environmental pollution produced as a consequence of their use are some of the reasons for which numerous organizations in E.U. and U.S.A. finance research projects, aiming to develop alternative energy sources. Biofuels production is an important field of this investigation. Such biofuels are mainly bioethanol (produced by vegetable sugars), methane (produced by anaerobic fermentation of organic litter) and biodiesel (produced by vegetable oils). Secondarily, research is invested for hydrogen and hydrocarbon of microbial (bacterial) origin production.
However, as biodiesel feedstock can be used not only oils of vegetable origin but also industrial and agro-industrial by-products rich in carbon sources, after their biotransformation in lipids by oleaginous microorganisms. These by-products are produced in huge quantities during industrial and agro-industrial activities and should be considered as raw material rather than as wastes. Then, they can be used as carbon sources in biotechnological and chemical applications. Molasses, raw glycerol, olive oil wastewater and backwashes of agricultural industries (i.e. of raisin, fruits and vegetables treatment) are some by-products of major importance in Greece. 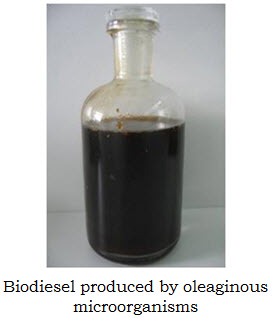 (a) Development of biotechnological methods for production of biodiesel using industrial and agro-industrial by-products or waste.

(b) Environment protection and conservation by decreasing the amounts and toxicity of wastes that nowadays are dumped in the environment. Following biotechnological process waste will be considered safe for the environment