Scholarship of the M. Sc. student Andreas Giannopoulos, in the field of renewable energy sources.
Lipids are an important reserve of energy of oleaginous microorganisms. Various organic substrates are assimilated by microbes and metabolized to produce lipidic contents. Many byproducts of the industry can be used as carbon source. The utilization and conversion of these substrates to valuable products is of great economic interest. The lipids accumulated are mainly triglycerides, composed of glycerol and three fatty acid molecules, and can be directly used or after their modification to appropriate derivatives, such as biodiesel. Furthermore, certain microorganisms are capable of producing extracellular lipids (biosurfactants) which are useful in flushing and recovery of oil as well as in other areas of industry. 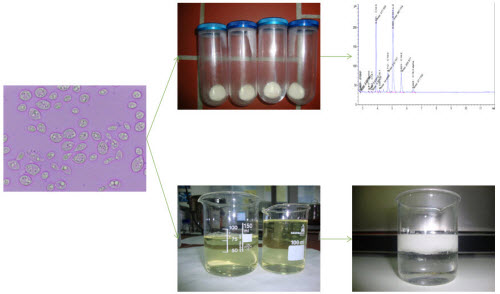 Crytpococcus curvatus produces lipids and biosurfactants when cultivated on glycerol. Above: Fatty acid composition of lipids analyzed in gas chromatographer, Down: Biosurfactant

(a) Study of lipid accumulation in yeast cells, for the production of biodiesel

(b) Biosurfactant production from yeast cells